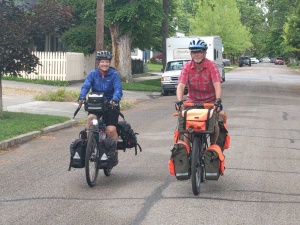 Camp #2 in Canyon Village Campground
Kathy made a snow man.
Honorary park rangers!
Lower Falls of the Yellowstone River
Lower Falls
Lower Falls
Grand Canyon of Yellowstone
Kathy with John
Hank – Cell service at Canyon Village is best early in the morning before everyone is up. Every attempt to post a blog entry failed, according to my phone’s WordPress app but actually succeeded–mostly kinda sorta. I had to delete the duplicate entries. I apologize for all the emails.
A group of Russian girls in next campsite were packing up and giving away beer. They had two 12-packs for the taking. I took two bottles. The snowbank next to the tent made for a good cooler.
Since I was unfamiliar with Yellowstone, I had reserved a full campsite online a couple weeks back. The site was near the end of the campground, which gets higher and higher as you move farther from the entrance. Consequently, our campsite was a long climb each and every time. This morning we went to front office to see about moving. We learned they have several hiker/biker spots that can’t be reserved online but they are reserved for hikers and bikers on a first come-first served basis. Plus, it was within walking distance of showers, laundry, food, etc. So we switched and that saved us $33 bucks over the regular site. We moved our stuff and set up camp. There was one tent set up and a couple of panniers were in the bear box so there was already one bike tourer in the camp.
Our legs were still tired from yesterday so we took it easy. We rode the north rim loop and saw the Grand Canyon of Yellowstone as well as the upper and lower falls. It was only a 2-1/2 mile loop on the bikes but we still have lots of walking up and down trails so we still got a workout.

One thing I think everyone notices about Canyon Village is that there are no public outlets for charging devices. The couple of visible outlets are marked not for public use. I found one by an ATM machine to use. The bathrooms have them but those are signed for grooming use only. Besides, who wants to babysit a charging phone in a bathroom? Okay, so I did. It was a very breezy day with strong gusts. That helps keep the mosquitoes away. The lodgepole pines swayed in the strong gusts and whacked against each other. Occasionally a branch would break and fall to the ground.While on the North Rim Loop we saw another bike tourer. He also got a hiker/biker spot and in the evening we became friends with John from Buffalo, WY. He noticed one bear box had a bunch of firewood in it so we had free wood for the fire pit in the evening. John has over 30 years of touring experience. He’s currently on a 10-day tour aroundish Wyoming. We built a fire and talked for 3-4 hours. He likes how we have no rules for our trip. We’re not being purists and having to cycle every mile. John told us of several of his tours, including going through Spokane, central Washington, Nebraska,and the Northwest Territories. He has a lot of great stories.

Morten Bransmark from Zealand, Denmark showed up later in the evening and joined us after his shower. He is on a 2-1/2 month tour of national parks in the west. Today he did a 75-mile loop north to Mammoth Hot Springs and returned via Dunraven Pass. Yesterday he did a 100-mile ride to see all the geyser basins. John asked him about the route to Mammoth because he was also going that way as were Kathy and I. He told us not to go that way. There was five miles of construction and bikes can’t pass through. He and his bike got a ride in the pilot vehicle.  We figured that if he can do it then so can we. Morten has to return to Las Vegas by July 7 where he will rest for three days and pack his bike and gear. He flies home Jul 10.

It was late and dark so we put the fire out and hit the sack.

Kathy –  What can I say? Yellowstone is absolutely breathtaking!  We are really enjoying our time in the park.  I was one happy camper once we moved campsites down to the Hiker/Biker area.  That trek up the steep hill at the end of a long day of climbing was a bit rough.  We rode 45 miles with 2,000 feet of elevation yesterday.  Today is was great to relax and ride around the north area of Yellowstone to see the beauty.  Only did a total of 15 miles on the bike, but we added some great hikes into it so it made for a good day.  I really enjoyed our evening with John, the bike-packer from Wyoming.  John has toured most of the U.S. and some areas multiple times.  He is a rock star!!  We had may laughs and great stories around our fire pit for the night. It was also great for Morten, the bike-packer from Denmark, to join us.  This guy is truly amazing with just how much he can accomplish in one day.  He told us many great stories about biking all over Europe.  I feel like such a new-be compared to these two amazing cyclists.  Maybe someday I can be as bad-a$$ as them.  🙂  It was a really wonderful day of easy travel and great new friendships.  All is good.